Every once in awhile I get stuck when making a beat, like I need to hear the vocal part before I move on, or it just sounds done, doesn’t need anything else but a vocal, but sometimes MC’s cant see that vision, it might feel like it’s not finished. This beat was like that, it was getting passed on by a couple of artist and I knew how “flow friendly” beat this was, but no one was biting, until Thack heard it, and rode that beat like a old rodeo hand (not sure if that is a actual term or not). Beats like this need a lot of punch lines, why i thought my brother 6’6 240 was perfect for it, but so was Thack. Thack went so hard with the punch lines that we tried to cater the video around his verses (hard to do with limited video budget, meaning none), not sure how successful we were, but it sure was fun! The video got really good feedback from the minute we released it. 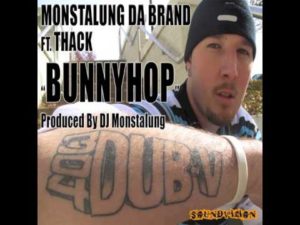 Its a very fun track, which is reflection of me and Thacks writing and recording sessions, they are fun. We really slay this song when performing it live, the crowd really gets into it, the beat has a natural bounce that is infectious blaring through BIG live PA speakers. Not sure why we called it BunnyHop, I’m sure its the bounce in the beat I was just speaking of, but this song was a example of my simplistic theory (later confirmed by Kanye West in the Rolling Stone article about when he met Rick rubin )My brother (6’6 240) later agreed he slept on the beat and concept once he heard BunnyHop. – by Monstalung